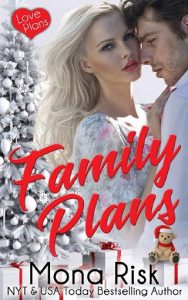 The plane crash devastated two families and revealed painful secrets. Can a brighter future arise from those ashes at Christmas time?

Left inconsolable by his wife’s death in a plane crash, Tim Kent dedicates himself to his daughter, Brianna. He allows her to get closer to her best friend Debbie whose father died in the same plane crash. When Tim meets Erin Perkins, Debbie’s mother, he’s impressed by the beautiful, young woman struggling to raise six children on her own while working at an exhausting job. He does his best to help her. Attraction develops between them. While Brianna practically lives with her friend Debbie and shares Erin’s motherly attention, Tim acts as a surrogate father for the six fatherless children. But the sorrowful plane crash that brought them together threatens to separate them when shocking secrets are revealed.
Can a brighter future arise from those ashes at Christmas time?