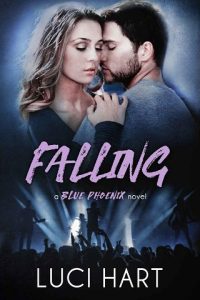 Sky’s world turned upside down when she met rock star Dylan Morgan and exploded when she discovered his hidden past.

Four months since Sky learned Dylan’s devastating secret and he left, she’s trying to piece her life back together. Without an explanation from Dylan, Sky has no choice but to move on and forget the rock star who captured her heart. But can she?
Dragged back into the life he ran from, Dylan continues to spiral downwards as he copes with his fame the only way he knows how. Shattered by the revelation that Sky knows his darker past and unable to let her go, he finally forces himself to return to England and explain. But is the truth any better than the lie she believes?
Sky and Dylan reconnect and attempt to build on the shaky foundations created by their secret summer romance. But when the past collides with the present, the events send more shockwaves through their lives.
Taking place in the epicentre of the Blue Phoenix world, Sky and Dylan’s story continues amongst the chaos surrounding the band at home and on tour.
Falling is the second book in the Blue Phoenix rockstar romance series. Perfect for fans of captivating steamy romance, hot and brooding British rock stars, and strong, sassy heroines. The first book Interlude must be read first.

Please note: the books are written in British English and contain spelling and idiom that could look incorrect to some reader