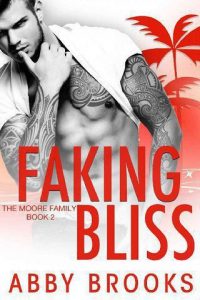 A fake relationship with a lifelong crush? What could go wrong? (Hint: everything!)

Ellie Charles will do anything for anyone, despite her honest streak making it awkward. But a fake relationship?
That’s one thing she won’t do. She deserves the real deal.
After James Moore’s high school sweetheart calls off their engagement, he fully intends to drink himself into oblivion—until Ellie comes along and sticks her nose in his business. While most people only tell him what he wants to hear, she calls life like she sees it. Her honesty is refreshing…kind of.
With his brother’s wedding around the corner, James’ family is worried about his broken heart and won’t let up about his new lifestyle. Their worry gives him an idea—pretending to date Ellie is just the cure he needs.
Wrapped in the (fake) safety of his arms, she opens up in a way she never has before. The more they’re together, the more she’s in danger of falling for him for real. And the more James realizes that just when he turned his back on love, it showed up again, whether he was ready for it or not.

***This title was originally published as Carried Away and has been re-worked, re-edited, re-titled, and re-published.***