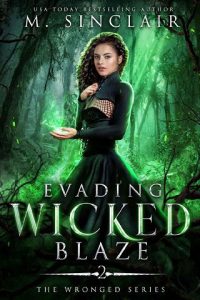 Wicked Blaze Correctional has fallen, and along with it, my chance to take revenge against Drake for Clara’s death. For now. Mark my words, though, he would suffer at my hands. It was only a matter of when.
Instead of burying my hand in his chest cavity and removing his heart, I was making my way through an unknown realm with my men. A realm that we were finding featured terrifying bloodthirsty creatures and even more dangerous magic users. Something I hadn’t thought was possible, considering the men I was with.
My human, mage, wolf, fox, magic eater, and I were in survival mode. That was the only way to make it day to day here and despite the serious nature of our situation, I was finding the natural connection between the six of us was only growing stronger as we went from being prisoners into something a lot more vicious. A lot more savage.
But what happens when we are captured again?
This time not by a prison but the cannibalistic village of Feòil. Let’s just say, I am really hoping that the magic I garnered from that supposedly ‘special’ stone at Wicked Blaze was going to make an explosive appearance or else we were landing ourselves on the menu. I may have been confused on what we were going to do next, besides finding Drake, but I knew I didn’t want to die. I knew there was more to my life than being eaten alive after escaping one of the most dangerous prisons in all of the realms.
The more time I explored this realm though? The more I’ve come to realize that this land may not be as unfamiliar as I assumed. The more I realize that there may be things about my life that I’d previously forgotten.
Let’s just hope that while we were evading Wicked Blaze, we weren’t landing ourselves in a far more dangerous situation.

Evading Wicked Blaze is Book 2 of The Wronged series. This trilogy will be a fast burn reverse harem filled with dark subject matters, a strong FMC, and insane men. Follow Valentina and her men on a journey filled with revenge, steam, and strong characters that don’t fit the norm of society. A bit crazy? That is just their normal.

This Fantasy medium/fast burn RH contains several dark themes that readers should be aware of: swearing (I know surprising, right?), gore, violence, assault, and sexual themes suitable for +18. Additionally, this book does have mature light m/m themes that develop over time. This will end on a cliffhanger! Book 3 is already up for pre-order.