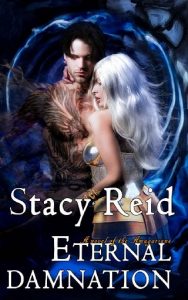 Heavy is the crown of darkness…

Lachlan Ravenswood lives in cold, emotionless exile lest he tempts the demon within him to rise. For centuries he’s denied its darkest urgings, his duty to the realm as a shadow assassin the only call to which he responds. Until her. Shilah Symonrah, an Imperial telepath on a mission to liberate her kingdom from a tyrant, arouses every protective and lustful instinct within him.

However, in a desperate bid to escape their mutual enemy, the Empire of Mevia, Shilah accidentally releases the demon inside Lachlan—awakening a deadly threat that could consume them both. For a terrifying prophecy foretold Shilah reigning as queen of darkness, a vision she did not understand until now. And if she succumbs to the searing passion between them, she will unleash forces that could destroy their very world…