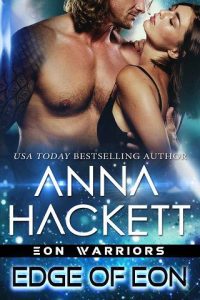 Get the first three action-packed science fiction romances in the Eon Warriors series.

Edge of Eon
Framed for a crime she didn’t commit, a wrongly-imprisoned space captain’s only chance at freedom is to abduct a fearsome alien war commander.
Sub-Captain Eve Traynor knows a suicide mission when she sees one. With deadly insectoid aliens threatening to invade Earth, the planet’s only chance of survival is to get the attention of the fierce Eon Warriors. But the Eon want nothing to do with Earth, and Eve wants nothing to do with abducting War Commander Davion Thann-Eon off his warship. But when Earth’s Space Corps threaten her sisters, Eve will do anything to keep them safe, even if it means she might not make it back.

Touch of Eon
She’ll do anything to free her sister and save the Earth from invasion, even if she’s blackmailed into stealing sacred alien artifacts…and becomes the prey of the dark, deadly warrior sent to hunt her down.

Special Forces Space Marine Lara Traynor wants to save her sister and her planet from annihilation by the deadly insectoid Kantos. Earth’s Space Corps give her one option: steal three gems sacred to the Eon Warriors. Lara has never failed a mission and she doesn’t plan to start now. What she doesn’t expect is the big, hard-bodied warrior the Eon sent to stop her.

Heart of Eon
Okay, maybe hijacking an alien commander’s warship wasn’t her best idea…
Genius computer geek Wren Traynor prefers her high-tech comp lab to socializing with people, and she definitely prefers it over crawling through the bowels of the huge Eon warship she’s hijacked. When Earth’s Space Corps blackmails her into this deadly mission, Wren will do anything to help her beloved sisters and save the Earth from invasion by the insectoid Kantos aliens. That includes entering into a dangerous game of cat and mouse with the tall, hunky, and seriously enraged Eon war commander who captains the Rengard.

***Each book in this action-packed sci-fi romance series can be read as a standalone.