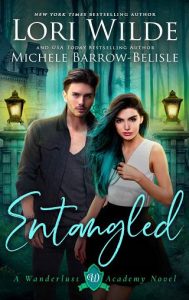 Two worlds—a dream guy in one—and a forbidden love in another.

To cover her grandfather’s medical bills, college coed Nora Dultry accepts a teaching job at Wanderlust Academy, a mystical summer camp for gifted children. For years, she’s hid a secret gift of her own—the ability to escape into a strange and fantastical dream world at will. But her life is upended when she meets Troy Bellisaro and learns that the world in her mind is dangerously real and her dreams have the power to threaten her life—and shatter her heart.

Troy not only owns Wanderlust Academy…he’s also her boss, who has her heartstrings tangled in knots—and he’s hiding dark secrets of his own. As Nora’s destiny becomes inextricably intertwined with Troy’s, she is torn, between romance and desire—between two fatally different men—between two fiercely different realities. And in a desperate race to save both the man she claims to love and the one who truly holds her heart, she’ll be forced to decide…

Which man is her dream come true…
And which is her waking nightmare.