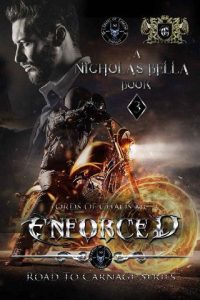 Fabian “Burger” Murphy is a man loyal to his club and family, which for him are one and the same. He will kill for them. So, when his sister, Sofia, tells him about what happened to their little sister, Gina, regarding her date with Roman Alexander, Burger is ready to spring into action and avenge Gina’s honor. Nobody disrespects a princess of the Lords and lives. All he needs is permission from his club president and father, Niyol “Dasan” Murphy, which Burger knows is a given. Roman is in for one hell of a surprise.
Roman Alexander knows he made the biggest mistake of his life walking away from Gina. She was the first woman he’d ever met that made him feel like he could truly be himself. Around Gina, Roman was vulnerable, and that’s what terrified him. That’s why he left. Unbeknownst to him, it was a move that would lead to two huge, menacing bikers wearing Lords of Chaos MC cuts walking into his office, looking for payback for their princess.

Diego “Dragon” Murphy finally has a man in his life he can give his heart to. His only concern is if Richard “Richie” Harrison would be willing to join the Lords of Chaos MC. If that wasn’t enough for Dragon to worry about, he still had a hit to carry out for a powerful mob boss. With Richie willing to help him, he may just be able to pull it off without a hitch if all goes according to plan.

Vito “The Vise” Castiello is a man others would be stupid to cross, but some still do. And once you’re in his grip, he doesn’t let up until you give him what he wants. When his brother and mob boss, Rico “The Monk” Castiello, tells him to go to Chicago to take over businesses there, he has his concerns. One is their partnership with the Lords of Chaos MC and the other is the triad that already controls the drug game on Chicago’s north side. In the midst of all that, what Vito isn’t prepared for is his powerful attraction to Zindel Esai, the beautiful employee that captured his eye who works in his bordello. For one thing, Zindel is a man and Vito is straight, but he can’t seem to shake his desire, but he knows it will pass…right?