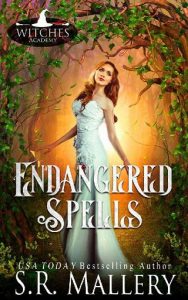 Sometimes Magic Can Be Complicated
What happens when a beautiful and talented witch refuses to use her powers?

Even as a child, Gillian could perform magic far better than most people. Her spells swayed teachers, nabbing boyfriends was a piece of cake, and she had the added ability to foresee events, good or bad. But when one of her spells causes a near-death and a future forecast completely rocks her entire world, she steps away from magic––until her friend’s murder slams her back into the game…and straight into a detective’s arms.

A waitress attending night school at the academy discovers, along with the gift of magic, she has royal blood flowing through her veins. America’s latest foodie channel sweetheart is a real charmer, who discovers not all the magic happens in the kitchen. Clair struggles with taking control of her magical powers until she meets a guy who really needs her help. A beautiful witch, empowered with the gift of creating strong magic spells since childhood, now refuses to use them––until her friend’s murder changes everything. An investigative reporter’s strange visions force her to really use her powers. When a rival tries to mess with her magic a witch must find a way to rekindle her flame.