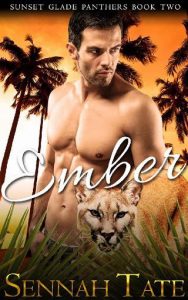 Brock knows his days are numbered. With his biggest competition newly-mated, there’s only one way for him to keep his rightful place as Alpha of the pack. He needs to find a mate of his own. Problem is, she’s not some mystery woman hiding from him in plain sight. He met her years ago; a day that was cemented in his memory, long before the rogue Sasquatch left him with a gnarly scar. It’s a long shot, but if he ever finds her again, he won’t make the mistake of letting her slip through his fingers a second time.

Sunset Glade is the last place Hailey ever expected to find herself in again. That is, until her grandfather’s grisly murder brings her back to the swampy town full of haunting memories. Memories she’s spent her whole life—and a lot of therapy—trying to repress. As a kid, she nearly died in this swamp, and now she’s supposed to call it home because of some inheritance she never asked for? Everyone always told her that the memories from that day at Falcon Crest Lake were just the product of trauma, her brain trying to make sense of an awful tragedy, but Hailey knows the truth: she was attacked—and saved—by monsters. Returning to the place that sparked decades of nightmares seems like a terrible idea until she meets a handsome stranger who sparks something else deep inside her. He makes her want to shed her sheltered past and take chances for the first time in her life.

Risks lead to danger, though, and when a group of shifters decides to teach Hailey a lesson for standing up to them, Brock has to decide what’s more important to him—being Alpha, or being with his mate?