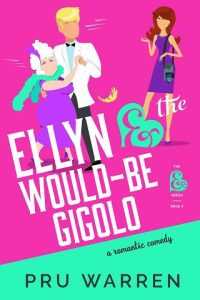 A funny, sexy romantic adventure that proves the adage: A good scoundrel is hard to find. And even harder to keep! Ellyn is in a “cousin contest.” Her aunt will give away five million to her favorite niece, and she’ll choose the winner on a luxurious cruise to paradise. Ellyn thinks she’ll do whatever it takes to win—including bringing a scoundrel on board to romance Aunt Cor.

Artie’s life as a con man has had its ups and downs—but now he’s hit rock bottom. Then Ellyn meets the former “Phoebus Apollon” (from DASH & THE MOONGLOW MYSTIC) and offers him a lifeline. Now Artie has to make a choice. He could marry Aunt Cor for her fortune and become “Uncle Artie.” Or forget the money and win the treasure he never knew he wanted—Ellyn’s heart.

A cruise ship rhumba contest, wealthy-lady shopping expeditions in exotic ports of call, cousins and competitors and one glum-faced maid: With all that going on, how do you stack the deck (nautical humor, get it?) to get what you want?

Note: You don’t have to read The Ampersand Series in order, but it’s fun if you do, since each successive book features a secondary character who becomes the hero or heroine of the next.