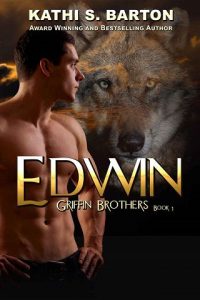 Edwin Griffin was looking forward to his retirement from the Army. But it seemed his superiors were having trouble letting go. As a wolf shifter and an immortal, Edwin’s senses were keen. He had no intention of “keeping in touch” or to continue working for them, for that matter. Something about them felt off, and Edwin had no intention of being a pawn in whatever scheme they were plotting.

Storm was very protective of her sister, Rain. Their parents had somehow found them, and Rain was vulnerable to their influence. The sisters both possessed magical talents that were growing stronger daily. When Charlie Griffin offered to help, Storm jumped at the chance to protect her sister.

Edwin was a bit surprised to find the feisty woman Storm to be his mate. She had a hard time with trust, but Edwin was determined to work on that, but he had his own issues to resolve.

Although retired from the military as well, Storm would still take on an occasional assignment. But when the assignment from her superiors was to do something about her mate. Well, things just got a bit more personal….