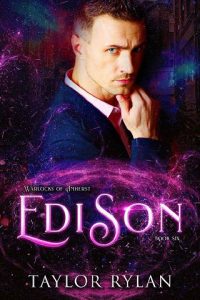 He’s the created warlock, but can he also be mate to a powerful tiger?
Edison isn’t your typical warlock. No, he is the warlock. Created by the goddess, he spent centuries doing what she asked, helping humans and paranormals alike. It isn’t until his third century that he would be given his greatest mission—that of mate and helping others to realize their full potential.

Wallace spent years barely surviving in his tiger form after his family was brutally murdered. He long ago gave up on his family finding him, realizing they were no longer on the earth with him. Starving, and too weak to venture far enough to hunt, he is about to give in to the cold darkness that calls to him when he is suddenly met with an intoxicating scent. But his mate couldn’t possibly be with him, could he?

Edison knows nothing about mates, or forever ones, except for what he has been told by the goddess and the Fate Thomas. Wallace knows more, but not much. Together they must navigate what it means to be a fated pair. Throw in a pregnancy that they knew was coming but didn’t know what to expect—easy, right?

Edison is the sixth and final book in the Warlocks of Amherst series. In it you will find a fated mate pair, a created warlock, a goddess that pops in unexpectedly, a protective alpha tiger shifter, and a found coven family. Many liberties were taken when writing this book, but it’s Edison—just go with it. This book takes place before the rest of the Warlocks of Amherst series and can be read in any order.