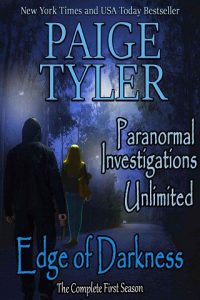 Rule#1: When you kill someone, they should stay dead.

It’s been weeks since Presley Kincaid escaped serial killerCarson Del Vecchio, but the nightmare is far from over because she’s started seeing ghosts. But ghosts aren’t real, right? Wrong. Del Vecchio, is back, and he’s after Presley to finish the job he started. She needs the kind of help the police can’t provide. That’s where Paranormal Investigations Unlimited come in. Presley convinces the ghost hunting team to let her tag along with them. Unfortunately, the group leader, Logan Malone, is a pompous jerk. A gorgeous, sexy pompous jerk…

As a former cop, Logan Malone isn’t interested in some ditzy civilian following his team on ghost hunts. But when he finds out there have been a string of murders the cops can’t explain and realizes that all the victims look a lot like Presley, Logan’s protective instinct kicks in. Now he’s got to keep her close. If only he hated that idea. Instead, the more time he spends with Presley, the more he likes her and wants her, but he can’t afford to be distracted by desire. Del Vecchio almost killed Presley once before. This time the killer wants no loose ends.

But there’s more to this problem than just secrets, murders, and a psychotic ghost hell bent on revenge.
Much, much more…