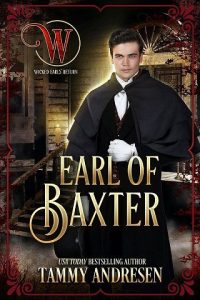 He’s known as the Earl of Bastards…
If society thinks the nickname is an insult, they are sorely mistaken. Mason, the Earl of Baxter, has grown up knowing he’s the illegitimate son of the Duke of Devonshire, otherwise known as the Demon Duke. He’ll join his father in hell before he bows before any man or woman of the peerage.

She’s an orphan with a dark secret…
Most think Clarissa is a saint. She’s tended wounded soldiers and helped raise forgotten children. But she is not all that she appears and there are dark secrets in her past that threaten her tenuous opportunities for the future. No one can know how she managed to escape…except one man already does…the Earl of Baxter.
And what he’ll do with that information is anyone’s guess.

She can’t control him anymore that she can the loud thrumming of her heart anytime the man walks into the room. But when specters from her past begin to circle closer she must make a choice. Does she trust the Earl of Bastards? And if she does, will she lose her heart?