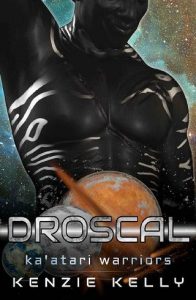 She was on the fast track to political stardom. Then warring aliens left her carefully nurtured plans for the future in shreds and stranded her with no way home.

Zoranna’s life was lined up perfectly and she knew it would play out exactly as she’d planned. She had scored the job as the Under-Secretary-General’s assistant which opened several doors. She’d cultivated relationships with political power players and cut her teeth with local politics. She was poised to become the next household name. Then the aliens came and shoved her dominoes to the floor. She was resilient and recovered, finding a position in the office of the Ka’atari Chief. Being stranded across the universe was a setback, but one she would overcome. Then her boss sends her on a mission that rocks her plans again, and she has to decide if redefining her vision of the future is worth the love of a criminal.

When Droscal met Anela and learned humans were more apt to rhun with Ka’atari, he dreamed of a mate and family for the first time. He decided to do whatever it took to be introduced to the few remaining single ladies. When the Ka’atari Chief called with a mission only he could complete, he knew exactly the price. As soon as he spotted Zoranna holding court over some of the worst criminals in the galaxy, he was hers to command. As rhun swelled between them, he thought his fate was sealed. But she has other plans, and despises those who break the law. Can he convince her he can be reformed?