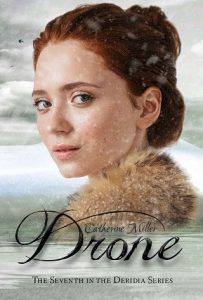 Chained.
Forgotten.
Wilful.
Proven useless in the breeding rooms, Gwynn is relegated to the tunnels for punishment. Left to toil—or maybe to die, if no master returns for her. If only she could let herself.
A desperate escape, the barest taste of freedom.
Only to find herself ensnared by another. Not as a thrall. Not as a drone.
But as something else entirely.
-x-
He was helping her. Again. He wanted the best for her, even if her nerves made it difficult to eat as quickly as she should.
“All right,” she murmured, unable to bring herself to look at him, her fingers tangling in the fur in her lap since he’d deprived her of her previous distraction. “So you were waiting for one of us. A slave.”
“No,” Gesper corrected, his voice firmer than it had been. “I already told you that is not your position here.”
Her mouth formed a firm line and she made her eyes meet his. “If you did not come for a slave, then what did you come for?”
He held her gaze, but there was something in him that betrayed his unwillingness to speak it.
But he was going to. For her. Because she insisted.
It was a foreign power she seemed to possess. Maybe that was simply the magic of today, and tomorrow it would flee from her again.
But not yet. And so he made himself answer. Grim-faced and reluctant.
“A wife,” he answered. “I came for a wife. And I found you.”