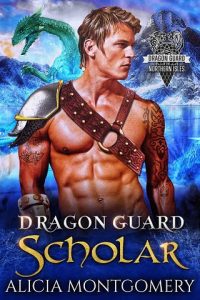 Introducing the Dragon Guard of the Northern Isles. Six dragon shifters who meet their fated mates.

A hot, nerdy dragon content to be alone
Dragon shifter Gideon wasn’t looking for love. He preferred silence, solitude, and the company of his books. So, when he runs into his mate, his first instinct is to keep her at arm’s length. However, he is constantly drawn to the feisty lioness shifter, and despite his own reservations, decides that he can’t ignore his instinct and his dragon’s determination to make her theirs.

A lioness shifter running from a painful trauma
Ginny Russel prided herself on being one of the best agents for the Shifter Protection Agency. No one knows she’s keeping a secret–that her job was the only thing keeping her from spiraling downward. She takes on mission after mission to forget a horrific event from her past and the assignment to find the traitor threatening the lives of the royal family of the Northern Isles is no different–except that she unexpectedly runs into her fated mate. While her lioness may be keen on claiming the hot, nerdy dragon guard, she is not. Bonding meant staying, and that was the one thing she couldn’t do, not when constantly moving from place to place was the only thing keeping her sane. She finds she can’t keep away from him, but tells herself that it’s only because he’s the key to helping her complete her mission–and leave as soon as possible.

Finding the mole who betrayed the king becomes their common ground and the passion and chemistry between them explode. But while Gideon is determined to claim his mate at all costs, Ginny’s building more walls to keep him away.