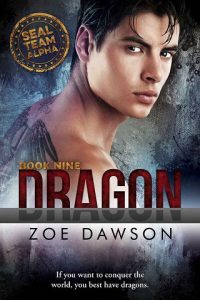 During the chaotic upheaval of his team, guys transferring, new guys coming in, and the veterans are left dealing with the loss of one of their own, Ryuu “Dragon” Shannon heads home for a visit to his Brooklyn neighborhood. He discovers that Jo is living with his mom, and to his shock, he finds his one-night stand with his tattoo artist produced a daughter, Ceri. He’d been drunk that night, and she’d been willing. As they work to navigate his newfound place in Jo and Ceri’s lives, he’s charmed by their sweet daughter and starts to fall for the girl he’d never gotten the chance to know and who has grown into a woman he can’t get off his mind.

Josephine Moretti is glad that Dragon is back for an extended leave. She remembered touching his body both when she gave him his distinctive tattoo and the night they spent together. A night that changed her life and…gave her Ceri. She’d had a thing for him, but had never gotten to know him as well as she hoped. He’d disappeared and she didn’t know how to get in touch with him. Now he was a Navy SEAL, and as far as she could tell, nothing had changed. Things were about to get complicated now that he was home and she wants her little girl to know her dad. But, Dragon has been away for a while, and Jo’s learned to take care of them both, but when a threat from Dragon’s past threatens them all, she finds that Dragon is every inch the hero she thought he was and maybe, just maybe, an amazing dad for Ceri.