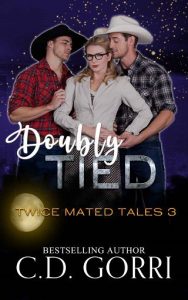 She thought she was all brains, but two growly Shifters prove she’s all heart.

Anise is the youngest Freeman sister and an ad executive with an upscale agency in NYC. Her brains are as big as her boobs, but the curvaceous beauty is fed up with working for too little money for a company with no scruples. A refreshing vacay with her siblings is the perfect opportunity to shake her groove thing!

Ani’s never seen so many tanned muscles on display. This year, she is taking the bull by the horns. She is determined to make her dreams, and fantasies, come true. Moongate Island beckons as an alluring escape from her disappointments while she bonds with her sassy sisters.

Brody DeAngelo is a Wolf Shifter and the Alpha of the Big River Pack. Ever since he ascended to his position without an official challenge, the Wolves under his command have been restless. With Mayne Nakoa, a Black Bear Shifter, as his Omega, things weren’t getting any easier.

Together, they form two thirds of the Triad needed to rule the Pack, but without their third holding their positions without bloodshed was iffy at best. Finding a female who can handle both Brody and Mayne, and seal the bond tying three together as one, is a challenge that can only be met by their true and fated mate. Their future and that of the Big River Pack depends on it. Without any other options, they turn to the Council of Triads for help.

Will they find an answer to their problems on Moongate Island?