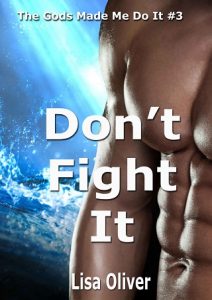 Lasse, son of Poseidon and Abraxas has always wanted a mate of his own. When Nereus, his younger brother, found his, Lasse’s hopes were revived. Poseidon, Abraxas, Nereus, Sebastian, and Thanatos had all found wolf shifters as true mates – surely it was only a matter of time before he found a wolf of his own. But no matter how much time Lasse spent with wolf packs, hoping someone would jump on him and brand him as “Mine” it just wasn’t happening. However, a chance night out with his friend Thor changed his whole perspective on what the Fates had in store for him.

Jason, also known as Ja, had been around a very long time. His heart filled with anger and despair he traveled from one fight club to another, trying to keep from thinking about the life and kin he’d left behind. In his head, he was one of the forgotten myths – someone the gods and the Fates had ignored. The Fates proved him wrong.

But all is not right in the world of myths and legends. Hades has disappeared from the Underworld and an angry Cerberus is roaming the earth determined to find him. While Lasse might think of Cerberus as one of his friends, Jason has other ideas…and that maybe Hades return isn’t the only thing Cerberus is interested in.

Features a sweet demi-god with a heart of gold, an ancient warrior who needs love to heal his heart, cameo appearances from some of the Cloverleah pack and of course a meddling Poseidon. MM. HEA. Could be read as standalone, although previous readings of the Cloverleah series and the two prior books in this series would help readers to understand the play between secondary characters. Although this story is complete, the epilogue does introduce a new situation which will be played out in the next story.