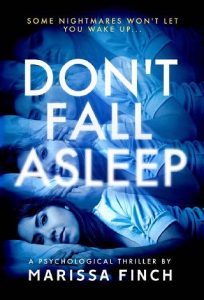 The sleep study is just supposed to be a way for Kelty Crawford to make a little extra cash to pay for her upcoming wedding. One night, one little drug, three thousand bucks. Easy money.
She should have known it was too good to be true.
Because the night of the study, Kelty has a vivid and violent dream. A man, dying in an alley. A bloody knife, next to her own hand.
And a familiar voice behind her saying, “You killed him, Kelty. You killed him.”
The dream would be bad enough. But things get more disturbing when, just two days later, Kelty sees a news report about a missing man.
Because it’s him.
The man from her dream. The man she watched bleed out in front of her.
The man she might have killed.
Desperate to figure out what really happened that night, Kelty is haunted by nightmares … but the truth might turn out to be even more terrifying.