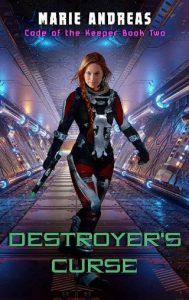 As a merc, Vaslisha Tor Dain had fought countless enemies and saved dozens of worlds. But now, trapped outside of the Commonwealth, she finds herself and her crew fighting—boredom.
Vas and her crew left the Commonwealth to deal with some major issues—including trying to find what happened to the last Pirate of Boagada. The Pirate was an agent of the now dead Clionea nuns. To do that, they need a Keeper—a highly trained nun.
Or in this case, a quickly trained merc.
Stranded not only on the wrong side of the Commonwealth border, but on an abandoned space station, things aren’t looking good.
An attempted attack on the Commonwealth has left Vas and her crew with no way to contact the rest of her people back on Home. And thanks to a dramatic destruction of the Traitor’s Folly, no ships will come near the space station to help.
Boredom vanishes quickly, as Vas finds herself training to become this mystical Keeper the nuns need. Attacks from illegally created mechanical rats, exploding fuel, and a strange nanite invasion all make her long for the downtime—almost.
Warships, space storms, and a five-hundred-year-old threat from inside the space station step things up and Vas now realizes they may be out of time to do what they need to do.
There are those trying to destroy the universe, and the nuns who could have stopped the attacks are dead.
Saving everything now rests on Vas and her crew.