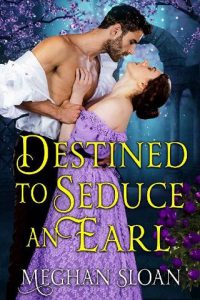 Rosalind Read had several suitors and a promising future. All that changes when tragedy strikes and her family is forced to flee to the border of Wales. There, in an effort to provide for them, she has to trespass every day into the forest to forage for food. What she never expected, though, was to meet there the most seductive man she has ever seen… When an enticing nobleman is thrown from his horse in the forest, Rosalind is there to give him first aid. While helping him recover from his injury, she will feel captivated by his seductive gaze. As Rosalind’s desire to the injured Lord grows, will she finally dare to surrender to this fiery love affair?

Being the Earl of Linwood, Henry Orson is despaired of living the life his strict father requires of him: marry the Marquess’s daughter, a woman he has no interest in, and produce heirs to the dukedom. When he injures himself and becomes amnesiac, he senses he has no wish to return to his old life. Instead, when he meets the alluring Rosalind, he is shockingly enraptured by her magnetic beauty. Just after his memories return, and he is found in an abandoned cottage, he will find himself trapped in a dilemma; Will he finally choose to risk everything for the only woman that set his heart on fire, or will he go back to the life he left behind?

Without even realising it, Rosalind and Henry will start playing a wicked game of passion that can neither explain nor resist. However, someone has vowed to tear them apart, threatening to reveal a well buried secret. Torn between desire and logic, will they find a way to overcome the obstacles and prevent a scandal before it is too late? Or will their passionate future remain forever a dream that ended too soon?