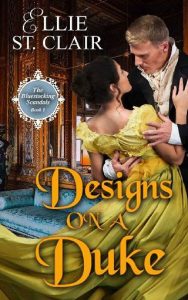 Her secret will save a legacy…
The daughter of a famed architect, Rebecca Lambert has been raised among the nobility yet understands the circumstances of her birth. As a common woman, she will never be able to pursue her passion and become an architect as well — at least, not under her own name. When her father slowly begins to lose his sensibilities and falls into debt, Rebecca becomes far more than a secretary, but rather the designer. No one, however, can ever learn the truth.

He is duke only in name…
No one was pleased when Valentine St. Vincent was shockingly named the Duke of Wyndham — least of all Valentine himself. He made a career and a name for himself through the use of his fists, but all it led to was his brother’s death. Now determined to become the man his family always wanted him by fulfilling his brother’s destiny, Valentine is caught between two identities.

A relationship that can never be…
When Valentine hires Rebecca’s father, she must complete the work commissioned to them. But as she spends more and more time at Wyndham House and the Duke’s country manor, she finds herself hopelessly falling for a man she can never have. For the Duke of Wyndham must marry a woman of the ton for her dowry and respectability — two things Rebecca can never provide.
Will Rebecca and Val resign themselves to the lives chosen for them, or those they were born to live?