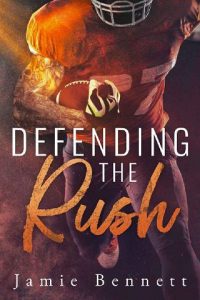 Jory Morin is a little…weird.

And Meredith Roberts is not. She likes her life and everything in it to be clean, neat, and orderly. And it was, until her father took the position as head coach of the Woodsmen football team, uprooted their small family, and moved them to Michigan. Now she’s living in a place where she has no job, no college, and no friends. Awesome.
That’s how things are going, anyway, until she meets Jory Morin. He’s a giant of a guy who plays for her dad, and Meredith can’t figure him out—the way he shows up at her house uninvited, his wild hair and beard, his RV full of concrete animal statues and cat food. And he doesn’t have a cat.

And then there’s the thing about him fighting, in trouble with his team, and making her wonder if the violent way he plays football is just who he is. Should she even be with him?
But there is more to Jory, as Meredith finds out. He has a heart that’s bigger than his old truck, and a brain that may not go in the same direction as hers, but it’s always going. In fact, Meredith will need to work keep up with him. Jory also has work to do to, to break down the defenses that she has built up to protect herself from the hurt in her past.
It won’t be easy to figure each other out, but together, they may have created an unstoppable rush!