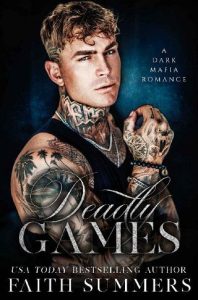 We were supposed to be two passing ships on an unforgettable night…
I accepted a foolish dare that changed everything-
pretend you’re someone you aren’t until sunrise.
I chose to be normal and free.
Not bound by the duties my father forced on me.
The sinfully gorgeous god-like man staring at me in the club with the I’m-going-to-devour-you smile was who I picked to be normal and free with.
It didn’t matter that he looked like the kind of villain I should run from.
Mercilessly, he claimed my virtue.
And something I never knew existed until him.
That was supposed to be it.
One night. One time. One fantasy.
At sunrise, we’d go our separate ways.
Except, I never knew my one-night stand would turn out to be my father’s new bodyguard.
Or… that he isn’t who he says he is.
Not only does Lukiyan Romanechka have dark secrets and a separate agenda that’s about to fuel a war, but there’s also something else he wants.
Me…
Like Hades, he wants to steal me away from the light and take me to his dark world.
And I just might let him.