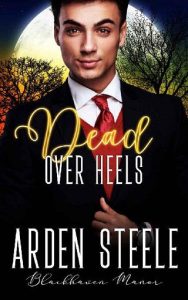 It’s been twelve years since the Awakening. Otherlings are out of the paranormal closet. The whole world knows that creatures like vampires, werewolves, and witches exist. So, seeing dead people barely even rates on the freaky scale. Right?
Wrong.
Fritz Tolliver figures he must have done something terrible in a previous life to be afflicted with such a curse. In fact, every bad thing that has ever happened to him can be traced back to his unwanted ability. So, when a stupidly hot werewolf who’s way out of his league claims to be his mate, he should be thrilled. And he probably would have been if he hadn’t gone and gotten himself haunted by a nasty spirit on the same day.
When a human male strolls into the station asking for a job—and promptly spills an entire Americano on him—Sheriff Vander Hale has a feeling it’s going to be a bad day. Then, the door opens, the wind shifts, and suddenly, his whole world changes. There’s nothing he wouldn’t do for his mate, no battle he wouldn’t wage, even if his enemy is technically already dead. Unfortunately, there’s just one problem with his plan.
He’d go to hell and back for Fritz, but how is he supposed to fight something he can’t see?