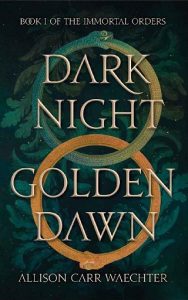 In a city where the elite are powerful as gods, the season is about to begin. The Immortal Orders will gather, pair and create a spectacle for all of Nuva Troi to witness.
Harlow Krane is a sorcière who wants nothing more than to recover from her most recent breakup in peace. When the season begins, her Order needs her help to save their ancestral occult district from being taken over by the Illuminated, the most powerful immortals in Nuva Troi. They offer to back off—if Harlow agrees to pair with their most eligible bachelor, Finn McKay. But Harlow has been burned by Finn before.
Finn McKay is one of the Illuminated. Rich, powerful, and he isn’t afraid of anyone—except for his parents. When they push him towards Harlow Krane, he knows their purposes are sinister at best. For the past seven years, Finn has done everything in his power to stay away from Harlow and he won’t break his resolve now, even if it means defying his parents. As the season begins, it’s clear something is dangerously wrong but besides Finn, only Harlow seems to notice.
With magic behaving strangely, the balance of power between the Immortal Orders and humans grows deadlier by the day. Harlow and Finn must work together to keep ancient grudges from resurfacing and take back their lives in the process. If they can get over their past, the whole world may have a brighter future.