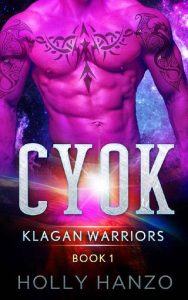 Jana’s life had been easy until the Elodians invaded Earth. Hiding with her younger brother for about a year in a cellar wasn’t ideal, but they survived. Then rescue came in the form of huge, horned warriors called Klagan, who promised they’d be safe.
Fighting the Elodians came naturally to Cyok. A Captain in the Klagan military, he spent his life surrounded by battles. When his latest mission took him to Terra, or Earth as the humans called it, he never expected to find his mate. He also never expected for his mate’s younger brother to disappear from a Klagan warship.
Jana’s hellbent on finding her brother. She refuses to lose the last of her family to aliens. Cyok will do anything for his mate – including go on a crazy mission to search for her brother. Not only are they trying to navigate uncharted planets, but also the bond that connects their souls…