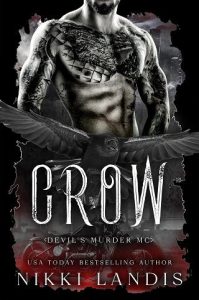 Crow, son of the former president of the Devil’s Murder MC, is determined to avenge his father’s death and repair the broken club left behind. Bad blood, bitter memories, and a territory feud decades in the making threaten to tear apart everything his father built. He might have left town to escape his past, but now there’s no choice. He’s determined to return and take his place among his brothers, even if they don’t want his leadership.
He didn’t forget what it means to live by the cut. The brotherhood is all he knows. It’s all he cares about since learning of his father’s murder: that and revenge.
Crow has a hell of a lot to prove, and it can’t come at a worse time. Stopping at a bar on the way back to reclaim his position in the club, he encounters a pretty petite redhead in a whole heap of trouble. His protective instincts kick in, and now he’s got more problems than he can handle.
Crow can’t resist helping out a woman in need, but this spitfire is way more trouble than he anticipates. Bella’s searching for her missing sister and desperate for help, even if that means bargaining with a dangerous biker. For reasons Crow can’t quite figure out, she makes him feel like a goddamn hero, like a man who can live inside the law instead of out of it.
Now there’s a rival club on their heels and innocent lives on the line. Taking her back to the clubhouse for protection sparks a whole shitstorm Crow doesn’t need. Bella insists he’s the only hope for finding her sister, and time is running out.
Nobody messes with this feisty redhead. And nobody threatens the Devil’s Murder because the club protects their own. Whatever the cost. There’s a reason the club is called a murder, and their bikes ride on the dark wings of circling crows. It’s an omen of impending death. No enemy can outrun the Devil’s Murder.