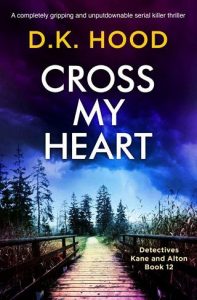 She wakes to the sound of footsteps outside her secluded home. Moving toward the window, she scans the dark woods around her and freezes. A tall figure in a long dark coat holds a crossbow pointed right at her. She blinks as lightning cracks overhead. But when she opens her eyes, the figure has vanished…

When the body of a man is found in the dense forest surrounding Black Rock Falls, Sheriff Jenna Alton immediately sees disturbing similarities with a past case—the same murder weapon, the remote beauty spot, and the way the victim is perched against a tree with no sign of a struggle. But the killer in that case was jailed for life.

Jenna suspects a copycat killer and her fears are confirmed when, during the town’s Halloween festival, the bodies of two tourists are found further down the remote trail. They too had been hunted down and murdered in another picturesque spot and all Jenna can hope is that the man behind bars can help her catch the twisted monster behind these new deaths.

As she comes face to face with the vicious murderer who has haunted her dreams for years, she is sure he knows more than he’s telling her. Looking deep into Jenna’s eyes, as if they’re two old friends catching up, he promises to take his final revenge on her for locking him up. But before she can learn more, he is dragged away by prison guards.

When a sudden emergency call takes Jenna and her deputy David Kane deep into the woods, Jenna senses something is very wrong about the situation. As a strange calmness falls over the forest, a familiar face emerges from the shadows. Will this killer be the one who finally takes down Sheriff Alton, and can they make it out of the forest alive?