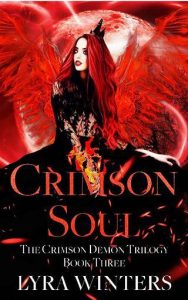 Lilith Whitlock was destined for a Hell of a lot more than she bargained for. Her being The Crimson Demon entailed immense power, and the longer it took her to figure out exactly what that meant, the more danger she was in.
The enemies she’d faced until now were pawns. With a puppet master pulling the strings, a malicious threat loomed over her, and there was nothing her four supernatural men could do to stop it.
Once her true nature was exposed, she was taken to Heaven and locked away. Lilith was a weapon stronger than anything in all the realms, but with her magic sealed, she was at the mercy of the angel that ended her life a millennium and a half ago.
What they didn’t realize was that Lilith was no one’s weapon. She was her own being, and she would slaughter anyone standing in between her and the men she loved.
As soon as she gained access to her powers again.