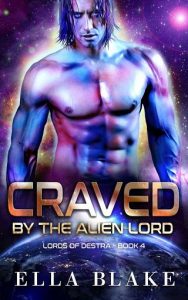 Rayna:
If one male remained alive in the universe, and that male was Lord Ledos, I’d let both of our species die out. He looks like a rock star, swaggers like the galaxy’s greatest gift swings between his leather-clad legs. He’s a force of nature. I’m a wallflower. We couldn’t be more opposite. It would be so much easier to ignore him if my body didn’t light up like a display screen every time he was near.
When I’m forced to live on his ship because some marks on his chest mean I’m his mate, I’m furious. I’m not cut out to be anyone’s mate, especially his.

Ledos:
I am Ledos, wielder of the longbow and lord of my Sola, my living ship and symbiont. My brothers consider me a waste, and yes, I have been known for indulging in pleasures of every kind. But that was before an enemy attack caused my ship to become separated from the others. Before I rescued one of my brothers and his Sola from certain death, and with him, the human females under his protection. Before I met her.
The instant I meet Rayna Lee, my body burns with the mating marks. The little human is mine. My true mate. My love. And for some reason, she detests me.
When an accident causes us to be stranded on the planet’s surface and forced to survive on our own, Rayna accepts me as her mate, but being away from my symbiont ship for so long is slowly killing me. I can survive anything the enemy Brakken throws at me, but I cannot survive losing her.