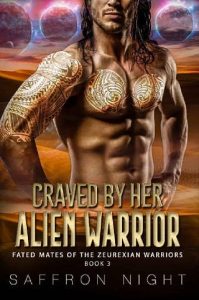 Worlds collide when a battle-hardened alien warrior who doesn’t believe he is worthy of love meets a feisty female who sets out to prove otherwise.
Adventurous and driven, there is nothing that would stop Dr. Janet Woods from going after what she wants in life. After pushing through countless barriers and finding her dream job in a highly competitive medical field, she has learned that nothing comes easy and that fighting for what she wants and believes in takes hard work, courage and sheer will. Being kidnapped by alien slavers hoping to experiment on her along with the group of women she is with, was not part of her plan. But when they are rescued by the most powerful alien warriors in the galaxy and taken to their home planet, she volunteers to work in the medical hub, only to find herself fighting against the hardest test of all; her attraction towards a broody, hulking, golden tattooed alien with eyes the color of molten steel. Ignoring him would be hard to do, especially when his dark gaze watches her every move during the day, with his hard muscular body tormenting her in her lust filled dreams at night.
Hentoris Van Peroaxis, Master Healer of Zeurexia has always remained loyal to his duties and his people. When a terrible injury, resulting in a limp, destroyed his reputation as a once prized warrior due to his own ego, he has spent his life keeping everyone at bay and instead focusing on curating new medicines and working tirelessly in his labs. That all changes when his mating force awakens the moment he sets eyes on the fearless female on board their warship, quietly tending to the group of terrified Terran females after their rescue. A female who is his equal in practice, a healer in her own home world and his fated mate who would soon depart, never knowing who and what she is to him. But with every tempting look she throws his way, every challenging phrase she speaks, he must struggle against the will of the fire gods and refuse the one thing he craves the most. For no female would accept a failed warrior.
As they work together and return from a successful philanthropic mission, they crash land on a desert planet, where Hentoris must battle against the dangers around them, while also fighting against his deepest, darkest and dirtiest desires to take the female and claim her for himself. Only to prove once and for all that he is worthy of love.