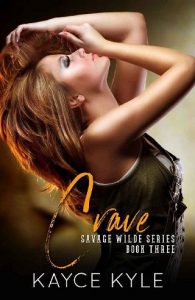 Before fame swept over her, Sibley Wilde, the lead vocalist and baby sister of the world-famous Savage Wilde siblings had eyes for her brother’s best childhood friend, Noah Storm. Even though fame swept her up at such a young age, she always found herself being sheltered and protected by those she loved most, especially her brother. The one her heart longed for became nothing but a mere dream, one she tucked away and gave up on for the career she and her family had poured their heart and souls into. After everything her brother and sisters had given up for her, it would be selfish of her to indulge in her own desires. So, for the greater good of all they had worked for, she felt such a sacrifice was minimal in comparison.

Noah Storm, now also the lead vocalist of a famous rock group learned early on in his childhood that there was something special and unique about his best friend, Rayne’s, youngest sister. Was it puppy love or something more? After all, the forbidden fruit is always the sweetest. Separated by fame and responsibilities, their paths cross once again. Will this road lead them both down a path full of destruction? Or will it pave the way for two hearts that have always been destined to become one?  Both fear they have a lot to lose should they indulge in one another when it always seemed such an impossibility. Every past moment stored within their memories where they seemed to be on the cusp of discovering their connection, something always intervened. Discoveries will be made. Relationships could forever be destroyed. But one thing is certain, the fate of their bond and how deeply rooted it is will be revealed.