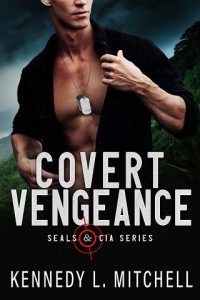 He’s desperate for revenge… and her.
Navy SEAL Tony “Flakes” Hackenbreg’s career and sanity ride on the upcoming mission to hunt and capture a known ARMs dealer. Being forced to partner with the dangerously beautiful CIA agent Elliot Smith is the last thing he wants or needs. With her love for explosives, sassy mouth, and a body most men would kill for, Elliot is everything he never knew he needed. Nights and days forced together the two shift from enemies to partners before morphing into a sizzling attraction that neither try to resist. But keeping Elliot protected during the covert mission proves to be the hardest challenge of Tony’s career.

She’s willing to kill anyone who stands in her way… except the one SEAL whose commands she’s eager to obey.
Elliot Smith’s last operation to Colombia cost her everything: her flawless mission reputation with the CIA, her partner, and nearly her own life. With vengeance on her mind, she doesn’t want or need a mouthy, dominant SEAL monitoring her every move like an overprotective babysitter. But when he sneaks past her defenses, making her open up about her past and hopes of a future, Elliot wonders if she’s finally met her equal.

When tension turns to passion in the middle of a covert mission they miss the signs of a trap, putting Elliot’s life in the evil hands of their shared enemy. Can Tony find her before the ARMs dealer slips away with the only woman he’s ever loved or will Elliot be lost for good?

*Covert Vengeance is a standalone, no cliffhanger, SEAL romantic suspense novel. Each book in the SEALs and CIA Series can be enjoyed on their own; however, because of character crossover, reading the series in order is recommended. This series is suggested for mature readers due to detailed intimate scenes, discussion of abuse, violence, and foul language.