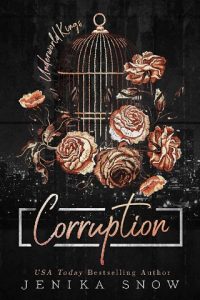 Anastasia was a Russian mafia princess.
I was unworthy to even look at her.
But that didn’t stop a bond, a friendship to form between us. She was the only good and right thing in my painful, brutal life. She was the only one who could look at my bruises and wounds and see I wasn’t a total waste of space.
But I was ripped away from her, thrust into the underground world of violence and fighting, molded and shaped to be the ultimate killing machine for the Bratva.
And that’s who I was now.
Razoreniye. Ruin.
Now, ten years later, all of humanity had been stripped from me, all the emotion and empathy that I’d once felt taken away until I was nothing more than the beast who craved blood and had far too many kills tallied up.
But they could never take her away from me. And so I followed her, watched her through her bedroom window, broke into her apartment, and held her as she slept.
I wasn’t a good man. I was carved out from the very devil himself, and although I would never be good enough for Anastasia, that didn’t mean I’d ever let anyone else have her.
So when she was forced to marry another, I did the only thing that made sense.
I took her in the middle of the night and kept her locked up until she realized she was mine and mine alone.