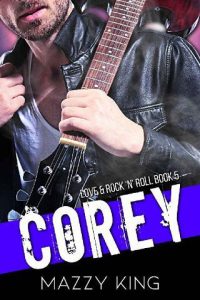 The Interlopers have had a monumental year and are ending their massive nationwide tour with three huge shows in Vegas and LA. Lead singer Corey is happy to be home, despite dealing with some disturbing social media messages he’s received from a “fan” claiming that the Interloper’s hit single is actually a song he wrote. He ignores the messages and instead focuses on the upcoming shows, including spending time with a photographer they’ve hired to capture moments from these final performances…a photographer who just so happens to be the beautiful younger sister of Corey’s childhood best friend.
Briar’s passion in life is photography, and she’s an in-demand concert photographer with a number of impressive clients. When The Interlopers want to hire her, she can’t say no; apart from being one of the hottest metal bands around, the lead singer is also her brother’s best friend. She’s always had a little crush on Corey, but the time they spend together over one week tells her he might feel the same.
But when Corey’s “stan” gets tired of being ignored, he might end up destroying their blossoming romance.
After all, the best way to hurt someone you’re angry with is to go after the thing they love the most…