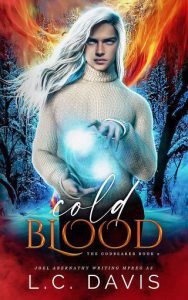 Just when I was starting to get used to being alone in my own head, now I’m possessed in a whole new way. And apparently, I’m an omega, which seems to be code for “magical thot who gets harassed by every alpha within a hundred miles.”
The worst part is, I don’t even know which one of these bloodthirsty douchebags knocked me up. With my luck, it’s probably Cameron, who sees me and the baby as a threat to his precious goddess, especially now that she’s gone MIA.
Weirdly enough, the news has caused a split within the cult, pitting brother against brother. Even though I thought they’d all be on the same side, now Sam, Cyrus, and (ugh) Alex claim they’ll do whatever it takes to protect me and the baby. Even if it means going up against Ichor and the rest of her cult.
Obviously, I don’t trust them. I might be a “dumb blond,” but I don’t need to get sacrificed twice to learn that lesson.
If only my traitorous heart would get the memo.