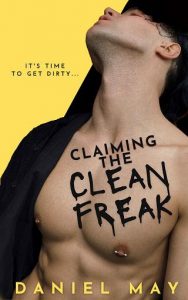 Claiming the Cleanfreak by Daniel May – Free eBooks Download

Isaac is a class A shitheel with only three things on his mind: his next vape break, his next paycheck, and a just-for-fun feud with fun police coworker, Atticus.

Atticus is a surface level stick-in-the-mud. Cleancut and built, he’s never found without hand sanitizer or a scowl. He hates three things: a disorganized workspace, germs of any kind, and Isaac.

The two exist on the verge of Atticus’s fist down Isaac’s throat at all times, until one day, Isaac discovers a secret: Atticus’s pierced nipples. Something clicks in his head, and Isaac goes from zero to a hundred. Obsessed. He has to have Atticus — whether or not the big guy is on board with this budding romance.

Things move fast, but Isaac isn’t happy just to get him in bed. He needs to own Atticus body and soul — and doing so requires confronting Atticus’s germophobia, by making him more scared of the person who loves him than he is of a dirty floor.

At 34k, Claiming the Cleanfreak starts as a bully romance which becomes much darker. It contains very rough and explicit scenes. Further warnings inside.