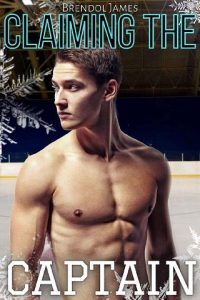 Danny
In a family where murder is on the table, coming out as gay isn’t an option. Hockey is all my dad expects of me. I should’ve already been drafted, so I need to find out what I did wrong and fix it.
Even if I could risk it all, the guy who seduced my first boyfriend during Nationals wouldn’t be the one. He can play the thick-headed pretty boy all he wants. I’m not buying it.
My safest option is to keep my head down, work hard, and earn my place in the Olympics.

Nick
Life is a game, and I’m fantastic at it. Model, star hockey player, and the only out bisexual in my high school — nobody took me seriously. If I made myself a joke, nobody could drag me down.
Then Danny Darrow’s disappointment shattered me. I just wanted to get in his head, but he got in mine.
Somehow, we’re on the same team. He’s captain, and I would follow him anywhere. So why’s he pretending to be straight? And does he not even remember that I’m the guy who seduced his boyfriend?