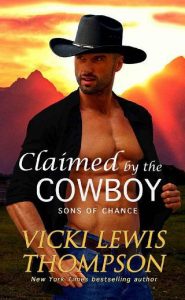 He wants a second chance…

Rancher Jack Chance would rather face a ticked-off grizzly than admit he screwed up. But he didn’t treat bar owner Josie Keller right and she’s gonna demand some groveling. Not his style. Can he swallow his pride long enough to win her back?

Josie’s heart shattered when Jack abandoned her. She doesn’t trust that sexy cowboy as far as she can throw him. If he’s the same old Jack, she’ll heave him out of her life faster than he can say he’s sorry. He can either man up and stake his claim… or lose her forever.

Saddle up for the third book in the Sons of Chance series! Steamy western romances from the NYT bestselling author who brought you The McGavin Brothers of Eagles Nest, Montana. If you like sexy cowboys, charming small towns, and laugh-out-loud adventures, you’ll love the Sons of Chance. Pick up your copy of Claimed by the Cowboy today!

*Note* This title was originally released in 2010 as Claimed!