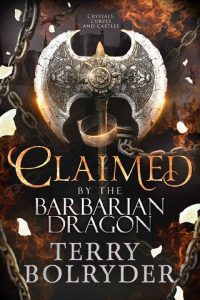 Marked by a monster, protected by a dragon…whether she likes it or not.

Mara is just a regular woman who loves her crystal shop, sending good vibes to others and chatting in her shifter reader group, until she looks down and sees an unfamiliar mark on her hand. Now that shifters are coming out publicly, supernatural events are becoming more common, and she has no choice but to call the double dragons who police such matters. They tell her that something is coming for her, and the only thing that can protect her is something no one can control.
Konar has been imprisoned for a hundred years within his fortress hidden deep in the wilds of Texas. As a conquering barbarian dragon, all he wants when he wakes is revenge, and to see the world that hurt him bow at his feet. When the tame, stupid earth dragons beg for his assistance, he tells them nothing could make him help them…until he sees they’ve brought a woman with inner and outer beauty, curves beyond compare, and an inner power that calls to his dragon, demanding he make her his own.
When Mara refuses his arrogant offer of help, Konar takes things into his own hands, literally. Though Mara’s good heart makes it hard to accept Konar’s vengeance, eventually the heat between them erupts, and steamy nights and fun days quickly lead to Mara falling for the gorgeous man even with all his eccentricities. But something is still coming after her, based on the countdown on her hand. And even if Konar is a dragon who can level cities, the thing coming to take her might just be even worse.

Warning: Contains scorching hot dragon love, an extremely persistent but protective barbarian, and a sweet curvy heroine who will melt your heart.