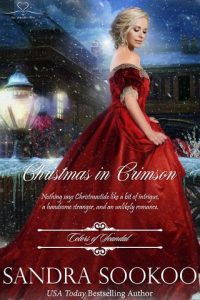 Nothing says Christmastide like a bit of intrigue, a lost treasure, and an unlikely romance.

When widowed Amelia (Belle) Stanton—Lady Ravenscroft—finds a raggedy military man using her barn as refuge from December rains, she’s not immediately concerned. Returning soldiers often crossed the countryside on their way to other destinations. However, there’s something about the way the handsome man speaks and holds himself that makes her doubt his story, to say nothing about the immediate attraction between them.
The Honorable Montague Gabriel Hawkins is not on the attractive widow’s land in the Wiltshire countryside by accident. Sent by the Home Office, he is to reconnoiter and retrieve a valuable painting stolen by Napoleon but hidden when it became evident France would lose the war. Once belonging to French royalty, the return of said items would bring a hearty fortune and accolades, but instant desire for the widow might distract him.
When the attempt to keep his mission a secret fails, Gabriel is caught up in Christmastide activities. Belle is entirely too intelligent and soon she’s joined him on the hunt for not only the painting but other lost treasures. As they uncover clues and are waylaid by torrid affair that ignites between them, danger follows closely in their footsteps. It’ll take some clever planning and holiday play acting to keep not only the priceless heirlooms safe but also themselves alive. By Christmas night, love might be theirs if luck is on their side.