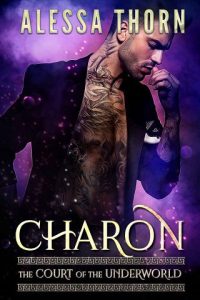 The ferry man of the dead is on the hunt for the cursed sorceress of Aeaea…but he’s going to find a lot more than he bargained for.

Charon has been recruited by Thanatos in the search for Circe, Hecate’s niece, and one of the most powerful sorceresses in history. Finding an cursed island that doesn’t exist on any map is hard enough. He also has to convince Circe to trust him, and trusting strangers isn’t something the sorceress is known for.

Circe has a reputation for turning unwanted visitors into pigs, but when a titan lands on Aeaea claiming to be there to rescue her, she’s willing to hear him out. Circe will do anything to be rid of Zeus’s curse keeping her bound to the island, and holds off letting her lioness eat him…for the time being anyway.

It’s been a long time since Circe has been in the human world, and Charon wants to make sure she feels welcome, but he’s going to discover that there’s more about Circe that’s bewitching other than the magic she wields.

CHARON is the sixth book in a new paranormal romance series, based in a dark, sexy city ruled by Hades and his court of gods and monsters. It contains adult content, including violence, swearing, and steamy sex scenes.