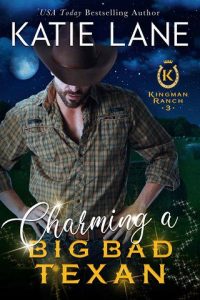 Red Riding Hood: All Gretchen Flaherty ever wanted was stability and a place to call home. Dragged from pillar to hitching post by her man-crazy mama on the never-ending search for Mr. Right, Gretchen vows to never waste her time on a manhunt. When she accidentally lands a job as the new housekeeper at Kingman Castle, the loud, boisterous ranch family is all this sweet southern pie baker ever wished for . . . except for Wolfe, the Kingmans’ bad boy brother. She tries to pretend his growl is much worse than his bite, but the western playboy makes her a nervous klutz and no glass of sweet tea is safe around her—because Wolfe will be wearing it. Knowing she will be fired if she can’t win him over, Gretchen decides to seduce the hungry Wolfe with her southern charm and tasty pies. But just when her plan starts to work, Gretchen’s past threatens to ruin her happiness and she’s forced to flee her new home . . . right into the clutches of the Big, Bad Wolfe. Soon she won’t just be baking desserts, she’ll become one.

Big, Bad Wolf: Wolfe Kingman is the black sheep of the Kingman family who has never quite fit in with his perfect siblings. Feeling useless on the ranch, he spends his time carousing and devouring every country maiden in town. But underneath the carefree exterior is a sensitive cowboy who loves his sisters and brothers and is struggling to find his place in the family . . . until a sassy, redheaded housekeeper shows up at the ranch. He knows he should avoid Gretchen at all costs. Not only because she’s become his sister’s best friend, but also because he has no desire to hurt the caring woman who sees him as more than just a bad boy. When his sister asks him to keep Gretchen from fleeing town, Wolfe is forced to offer her a job at his uncle’s failing tavern. Gretchen’s delicious pies and sweet nature turns the bar into a success . . . and a wolf into the type of man who might just be Mr. Right.

But when tragedy strikes and Wolfe retreats into his bad boy shell, Gretchen must decide if she’s going to run away like her mama or stay and fight for her cowboy hero in wolf’s clothing.