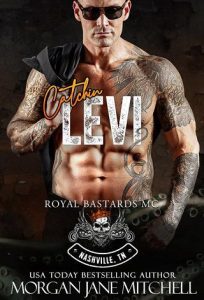 From Bestselling Author, Morgan Jane Mitchell comes the next installment in her Royal Bastards MC: Nashville, TN, Catchin Levi. Read as a Standalone or better as Book 5.

Leviathan is not just any biker, Enforcer for the Royal Bastards MC in Nashville, he’s a known monster.
What’s worse, he’s married.
How is Maren, Royal Road’s newest dancer, supposed to reel him in? After all, she’s deep undercover, bound to catch a killer red handed.
This Halloween as Levi plans his revenge on the rival gang who murdered his sister, Maren thinks she’s lured him in.
But Leviathan never met a woman he couldn’t capture. At first, Maren’s nothing but his bait. However, she awakens his monster, and he claims her as his own.
Entangled in his arms, Maren questions everything she’s ever known. When she discovers she’s the one who’s been caught in the biker’s trap, Levi refuses to let her go.

Loving Leviathan comes with a price she never thought she’d be willing to pay. Will she leave his rival gang to be with him?
Will he destroy both their lives just to have her?