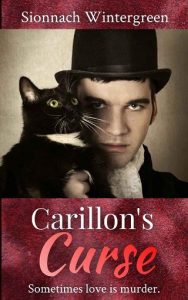 In 1888 Austin, Texas, a shy medium with clubfoot is visited by the horrific ghosts of murdered children and enlists the help of a rugged Texas Ranger to pursue their killer. As the two men hunt the murderer, they find themselves not only in the grip of a taboo love that could—at best—send them to prison, but also in danger of becoming the killer’s next prey.

In the twenty three years of his life, Thomas Carillon has known nothing but unrequited love. People don’t notice him; they only notice his clubfoot. He has given himself up to a solitary existence with only the companionship of his cat and the ghosts who visit him. When a rare child ghost, her massive injuries evident, asks Thomas for help, the only law man that will listen is a hard-bitten Texas Ranger who reawaken’s Thomas’s secret desires. The two grow closer as they chase the killer, but can they hold onto their fragile, budding love in such hard times?

Hadrian Burton thinks Thomas looks like an angel, except for whatever horror he’s hiding in that strange boot. Temporarily leaving life on the range and his complicated past to track down a killer with Thomas, Hadrian finds himself doing something he vowed never to do again—falling in love. Their “congress,” as Thomas calls it, is more intense than he has ever experienced. After a lifetime of virginity, the clubfooted man is going wild, and he doesn’t balk at Hadrian’s unconventional appetites. But they’re too different; Hadrian fears he will only hurt Thomas in the end. And yet, he has never fallen so hard for another man. How can he keep both his and Thomas’s hearts from being broken? And how can he bring the elusive Child Slayer to justice with only the help of a medium and ghosts?