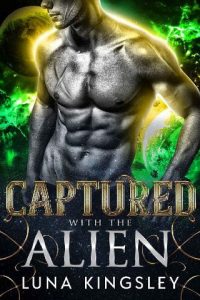 Captured with a beautiful female. Taken by the enemy…again.

Thrutik escaped captivity once. After an impulsive decision at Direglen Outpost, he finds himself in the hands of his enemy once more. He still carries guilt for the loss of so many of his own when his homeland was invaded all those years ago. He couldn’t save the female he loved before but he’s been given a second chance. The fiery redhead captured with him ignites his protective instincts and stirs something long dormant. He’s going to get out of this new prison, but he’s not leaving without her.

Charlie’s life was finally headed in the right direction. After surviving a rough childhood, everything is falling into place. That’s why she can’t believe her bad luck when she was abducted by aliens in her own home. A fighter all her life, she’ll never give in and submit to these monsters. She’s stronger than that. Then, the handsome silver-skinned captive in the cell next to her hatches a plan to escape. After years of relying only on herself, will she finally open up and trust this stranger to save her?

Escape won’t be easy. No one knows where they’ve been taken and the Yinean have perfected the ability to avoid detection. Thrutik may be able to keep Charlie safe, but they’re both in danger of losing their hearts.